Several magazines in the UK and Europe.

As well as the photographic work, John has been a guest speaker at several photographic societies in the UK (including the YPU Keighley Day event 2019) and has authored several articles on street photography.

My name is John Gill and I live in Yorkshire in the UK in a former coal mining area.
The “After the Coal Dust” photography project documenting life in these areas has had several exhibitions in the UK.
In addition to photography, I do some web and software work.

I have always photographed people.
Originally on 35mm and 120 roll film but almost always digitally now

AAPP:
Why people and not other genres?

I do not socialise easily so photography gives me a way to interact with people from a distance.
I feel more of an observer than a participant. Humans are the driving force for change in other genres including landscapes.
Often the human involvement can have a detrimental effect so even if I do photograph landscapes there will often be a human element.

Black and white come more naturally to me since I used to print black and white in the darkroom.
Colour was difficult and expensive to print at home so I concentrated on black and white.
Eventually, you learn to see in shades of grey rather than colours.

BW is also more forgiving. I shoot candidly and have to work very quickly so not having to worry about colours is one less thing to think about.

I also admire the documentary photographers of the past when BW was the primary medium.

Recently, however, I have been doing a few candid street portraits in colour.

AAPP:
‎What is the biggest challenge while you are shooting in the street?

It depends on the area.
People are very suspicious of photographers so I have to be very quick and very discrete, especially as I get quite close.
It would be nice to be able to have more time to concentrate on getting technically better images but it would lose the spontaneity and realism of shooting candidly.

Probably the biggest challenge in weighing up the risks involved in taking the picture –
especially in less affluent areas. I have had someone threaten to kill me!

AAPP:
Whose work has influenced you most and why?

Probably Bill Brandt in that his work has the gritty image quality of documentary work but also a strong artistic element.
If a photo can have an aesthetic quality as well as say something to the viewer then it’s a success.

Ideally, I’d be using the FF Canon I use in the studio for street work but it’s just not practical to shoot unseen with a large camera unless you’re in a tourist area. Most of my street work is done on Olympus m4/3 or even pocket cameras such as the Ricoh GR or even 1-inch sensor compacts.
Several of the exhibition prints were done on a Sony RX100.

Lens wise I tend to stick to the 28m-35mm (equivalent) range.
I like to get close and using a wide lens allows me to include the subject and the environment.
By restricting myself to just a small range I can pre-visualise what will be in the frame without using the viewfinder.

Some recent images are taken with a 90mm equivalent lens as I’ve been experimenting with candid portraiture.

AAPP:
Among your works, which one is your favourite? Why?

Favourites change all the time but ‘Leaving the Fair’ is one I like a lot (the old man with the Ferris wheel behind him).
I think this picture leaves enough scope for the viewer’s imagination to create a story.
A good picture should be as much about the viewer as it is about the photographer or the subject. 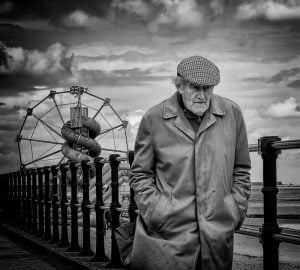 AAPP:
How do you educate yourself to take better pictures?

Just by taking more pictures.
I dislike books that try and teach street photography – most just teach cliches.
I just carry a camera all the time – the only way to get better pictures is to be in a position to take them.

AAPP:
Thank you, Mr John Gill, for your time to share your very own experience with us, and thank you to all readers too.

Pages on this site

See more photographs by John Gill at the After the Coal Dust website.